A white dress is a pretty scary thing to wear for a lot of us. But a white fitted dress? Well, that’s just raising the ante and many times…there really is no winner, unless it’s a wedding dress! But I went for it anyways and made myself one.

Is there a such thing as a classic white dress? I don’t know. It’s certainly not the “classic red dress” we all dream about, but for some reason, we’re more than happy to have that  vixen in our closet, even though it’ll only be worn less than a handful of times.

White, on the other hand is not something I see being worn often at all. In the summer? sure. But even then, it’s far and few in between because….well, let’s be honest: we all have those lumps and bumps we don’t want to show and white is the colour to bring those bad boys to life.

But what about in the winter? Can we wear it then? I mean, it is  after Labour Day and all…Ugh, see? There are already too many things to think about…Ah. Screw it. Who makes these rules anyways?

The Original Plan: A Summer Dress

If you look through my instagram, you’ll see I posted a preview of this dress back in the summer. I made it thinking it would be a great summer dress simply because it was white. But here’s the truth…

My cousin and I tried taking photos of this dress twice but I wasn’t wearing it well. It didn’t look flattering as far as I was concerned. On top of that, I had trimmed down the side seams so I couldn’t even alter it! Ew. Lesson learned…After tossing it aside, I stepped up my gym routine (because I wanted to, not because of the dress) and when I recently tried it on again, I was really happy with the it looked!

It dawned on me then that this fitted white dress might actually be a bit more suitable for the winter. See, the fabric is fairly thick and it has 3/4 length sleeves, which doesn’t really work for summer because I’d get hot, sweaty and uncomfortable in it. Fall is more browns and neutrals, so it wouldn’t fit there either. But winter?? Why not?! Not only will the dress be warm (ish), it will also stand out among the typical black at parties and events (and any other colour for that matter!). White also looks amazing against the snow. As my dear friend Humara put it, there is something so magical about wearing white when there is snow on the ground! Sigh….how dreamy!

Material and Under Things

Look, white is an awesome colour to wear, provided you’ve got the right material. If it’s too thin, everything is going to show and your outfit will look cheap. Invest in a thicker fabric because it’ll help hold it all in together. While white is bound to be a bit see through, the thicker the fabric, the less will show through.

I opted for a stretch knit fabric that had a bit of a design on it. As an afterthought, I realized it helps camouflage some of the smaller things you may want to hide. And on that note, it’s really important to wear the right under-things! You want to wear nude everything. And forget the lace and cute stuff, seamless is the grand saviour here! Although sometimes unavoidable, seeing any lines and detail from undergarments show through takes away from the elegance.

This dress took me 2.5hrs to make, including cutting. I have a sloper that I used to get the shape, so that removed any time spent thinking about sizing and drafting.

I put the back together first, starting with the invisible zipper and followed by creating a back slit. Then I attached the front and back together and added the arms last. I prefer this method as it almost guarantees that the zipper will go in properly the first time because I don’t have to fuss around with any extra fabric from the rest of the outfit.

After the dress was finished, I though looked nice, but plain. So made a belt using the buckle from this dress (because I knew I wasn’t going to wear it again).

White is not an easy colour to wear, especially if it’s a fitted white dress. But I’m happy now with the way it turned out. That is one of the perks of sewing: you can try and test out anything you want! Now that I’ve ventured off and tried this DIY out, I’m not afraid of wearing white anymore and will definitely give it another shot again!

What are your thoughts? Do you like to wear white? What about in the winter? Leave a comment below! 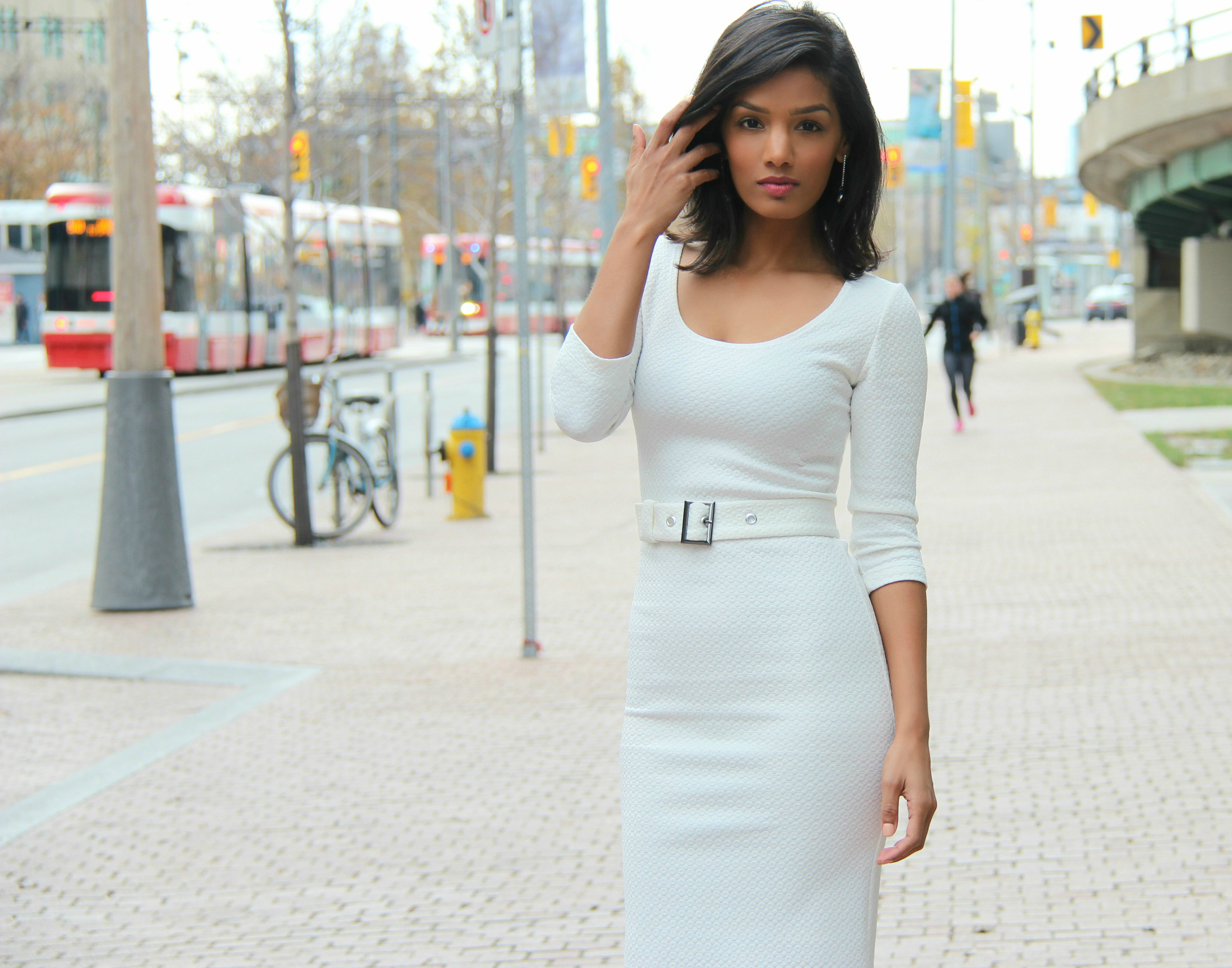 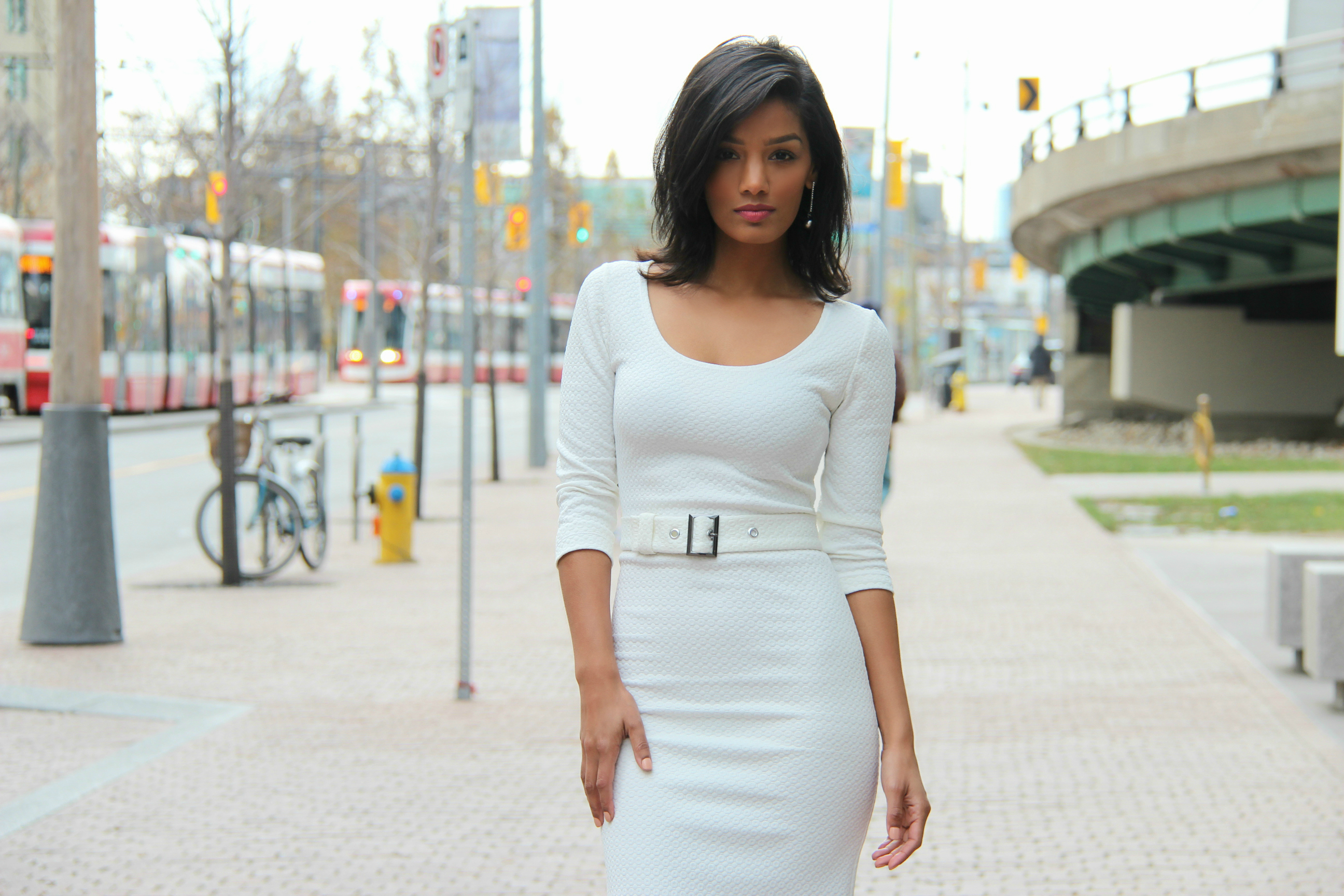 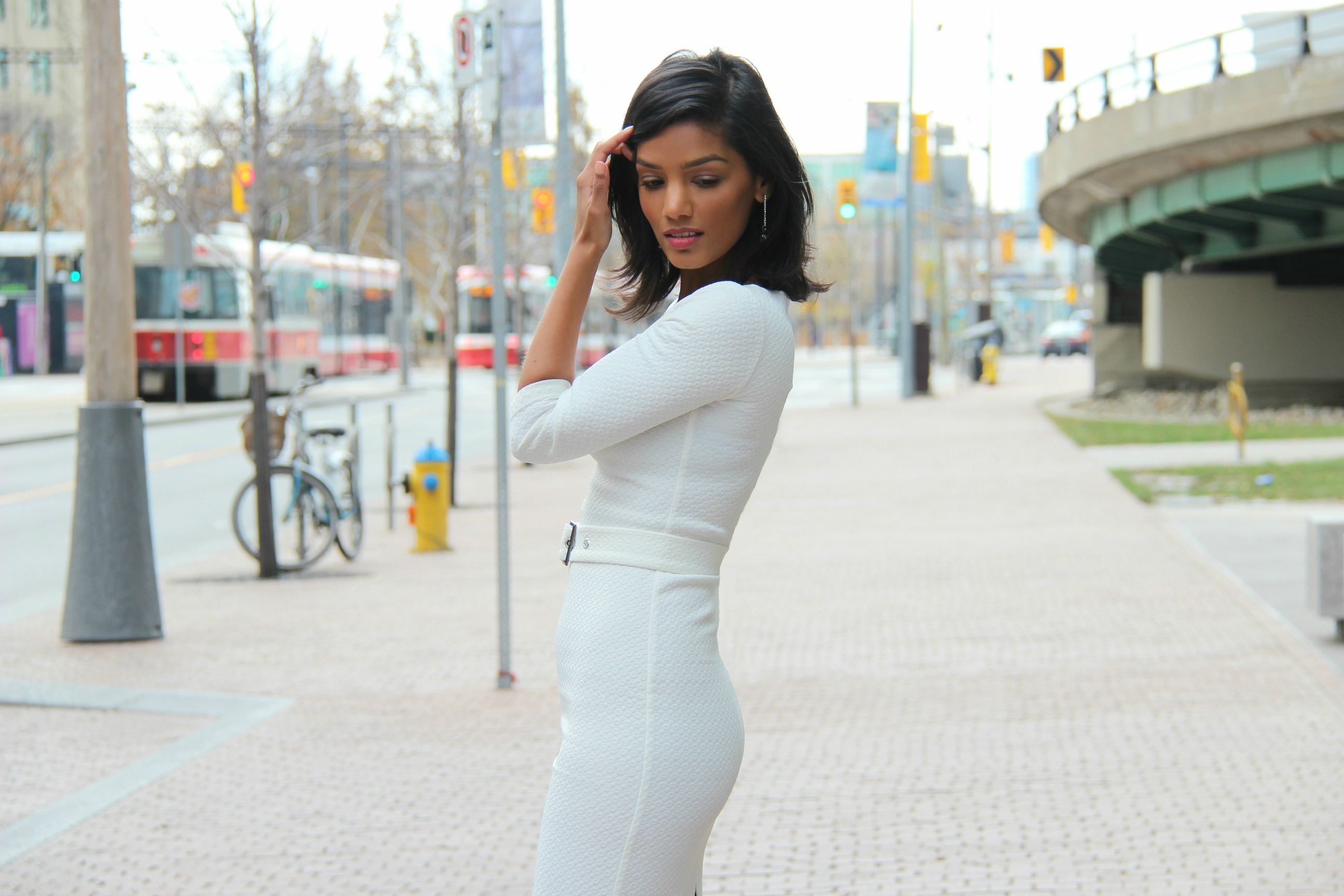 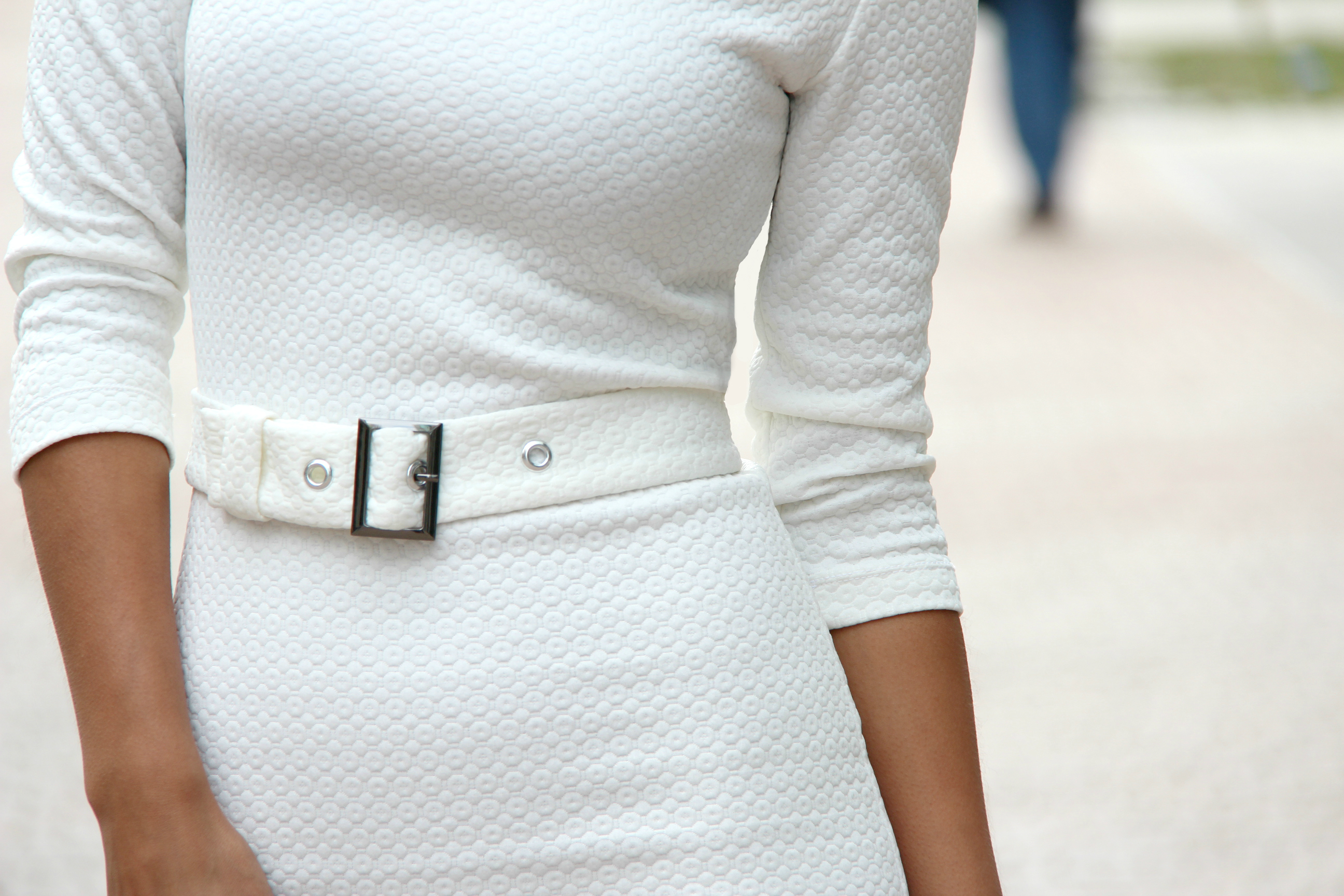 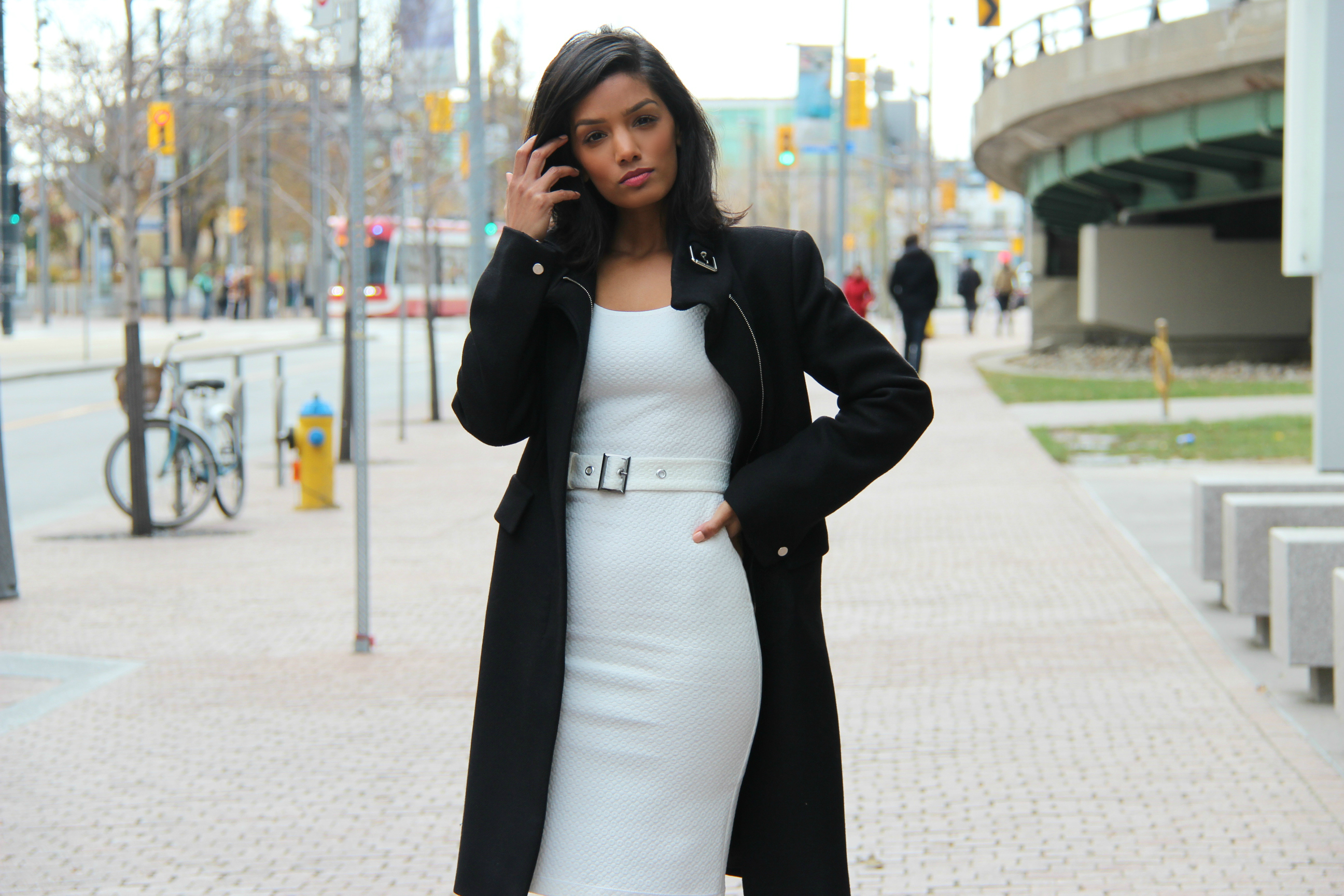 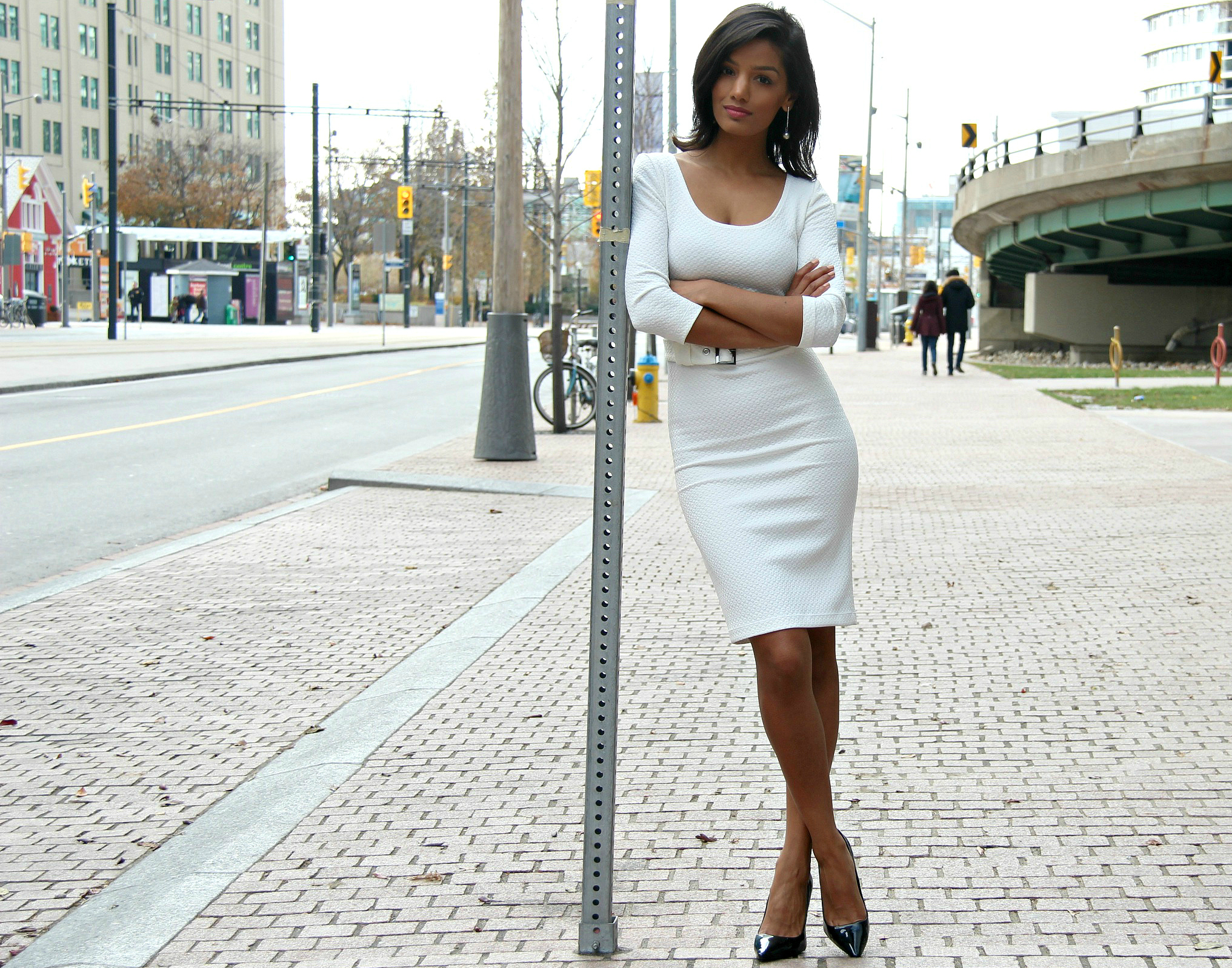 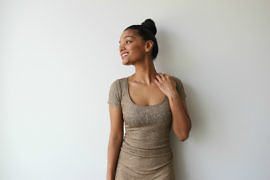 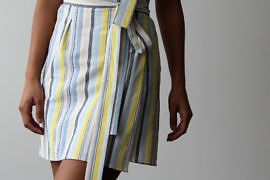